The LIGO Exploration Center is expected to host up to 10,000 visitors per year

Pendulums, funnels, and levitating balls make up just some of the exhibits at LIGO's Exploration Center, a new 13,000-square-foot experiential center funded by $8.1-million in grants from the state of Washington. The center is located at LIGO Hanford Observatory, in Richland, Washington. LIGO Hanford is one of two observatories that make up the Laser Interferometer Gravitational-wave Observatory (LIGO), which made history in 2015 after making the first direct detection of gravitational waves, or ripples in space-time, generated by the collision of two black holes. (The center's circular, architectural design is actually based on the first black hole merger detected by LIGO.)

Scientists, educators, and policy makers, including the governor of Washington, Jay Inslee, gathered for the center's official opening on June 2. Inslee and others gave speeches followed by the cutting of a blue ribbon adorning the front of the center.

"We need young people to get a spark in their life to know they want to push the boundaries of science," said Inslee in his address, explaining that there is no better place than the new LIGO Exploration Center to provide that spark. Also in attendance was MIT's Rainer Weiss, who, together with Caltech's Barry Barish and Kip Thorne (BS '62), won the 2017 Nobel Prize in Physics for their seminal contributions to LIGO. Inslee affectionately named Weiss the "Washingtonian of the day," calling him "a hero to many of us."

Strunk, who officially opened the new center by slicing the blue ribbon, worked with the LIGO team on all aspects of the design and planning for the new LIGO center and will now serve as its lead. Together with her colleagues, she helped secure funding for the project, wrote proposals and plans, helped select the design and build teams, managed the budget, and more. She was also involved in many of the design decisions, and even picked out curvy benches for the center reminiscent of gravitational waves. 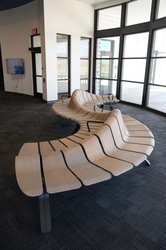 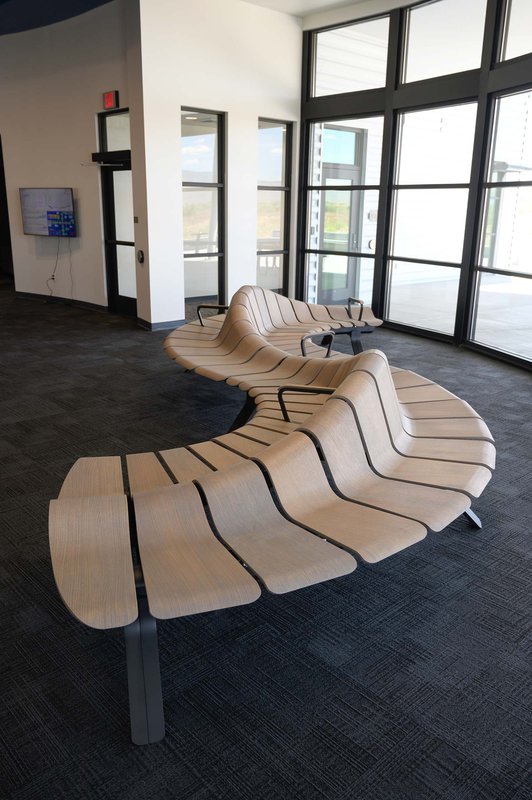 "Through the incredible energy, foresight, and tenacity of many people present here today, most of all Amber Strunk of our observatory, the LExC [LIGO Exploration Center] was funded, designed, and built," said Landry in his speech.

"LIGO has so many great stories to tell," said Tirrell in his remarks. There are stories about how science works and about scientific collaborations, he said, but there are also stories about the "missteps, mistakes, and corrections" made in science, which are important for the public to understand too.

The new center will house up to 50 interactive exhibits and educational displays, including a gold-plated 2017 Nobel Prize medal in Physics, donated by Weiss. Up to 10,000 visitors are expected to wander the center's cavernous halls each year, while adjoining classroom spaces will be used for teacher and student trainings and workshops.

Jones said the new center would develop a "world class and inclusive science workforce," while Reykdal pointed out that there are millions of students in the United States, many of whom "dream of places like this." Several of the speakers noted that the center was additionally a place for curious adults. "There's a poetic part to science," Weiss said. "It's the part that makes the average person's life more interesting."

One important goal of the center is to engage the underrepresented populations in the Eastern Washington area, including Native Americans.

Trina Sherwood, a member of the Yakama Nation who was at the opening ceremony, says the new center will spark imagination among Yakama children and help teach them a "balance between culture and technology." Sherwood said she was honored by Landry's opening remarks, in which he acknowledged the land LIGO Hanford is built on.

"LIGO Hanford Observatory sits on the ancestral lands of Indigenous peoples," said Landry. "We want to respect and acknowledge the traditional caretakers of this land, including the Walla Walla, Umatilla, Yakama, Wanapum, Cayuse, Palouse, and Nez Perce peoples."

The idea for a new exhibit hall based at LIGO Hanford was first proposed in the mid-2000s by Fred Raab, who, at that time, led the LIGO Hanford Observatory, and Dale Ingram, the outreach lead. The center was modeled after the NSF-funded experiential science center at LIGO Hanford's sister facility in Livingston, Louisiana. Ultimately, the researchers sought and received funding for the project from Washington state, thanks largely to Larry Haler, former 8th-district state representative, who championed a LIGO education center along with Washington state senator Sharon Brown.

"It's been a long pathway to get here," Landry said.

"All students and families belong here," said Strunk in her remarks. "The heart of what we do is open windows, so people can see what possibilities exist."

The LIGO Exploration Center was designed by architect Terence Thornhill and built by DGR Grant Construction. The outreach center is funded by Washington state, owned by the NSF, situated on a Department of Energy site, and operated by Caltech and MIT. 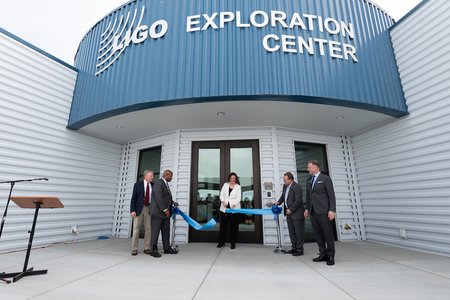 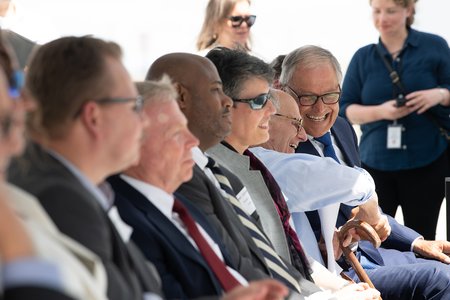 Guests at the grand opening of the LIGO Exploration Center, from right to left, include: governor of Washington Jay Inslee, Rai Weiss of MIT, Linnea Avallone of NSF, Sean Jones of NSF, David Tirrell of Caltech, and Chris Reykdal of OSPI. Credit: Copyright @ Kim Fetrow Photography 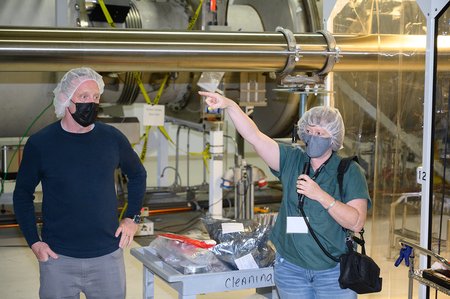 Mike Landry and Betsy Weaver of LIGO Hanford give visitors of a tour of the facility. Credit: Joe Giaime/LIGO 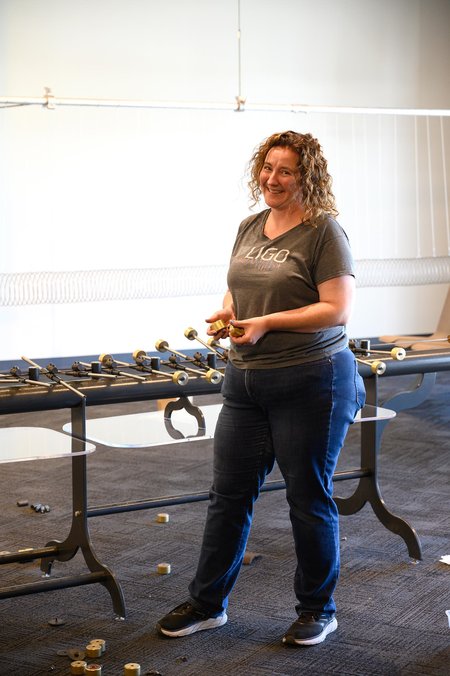 Amber Strunk demonstrates one of the new exhibits at the LIGO Exploration Center. Credit: Joe Giaime/LIGO 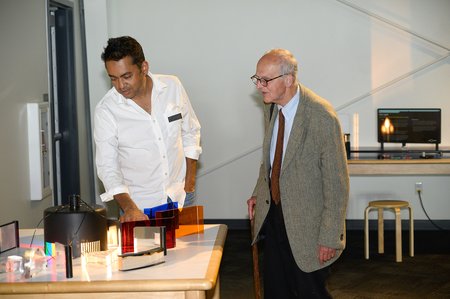 Rana Adhikari of Caltech and Rai Weiss of MIT discuss one of the new exhibits at the LIGO Exploration Center. Credit: Joe Giaime/LIGO
Image Gallery Lightbox 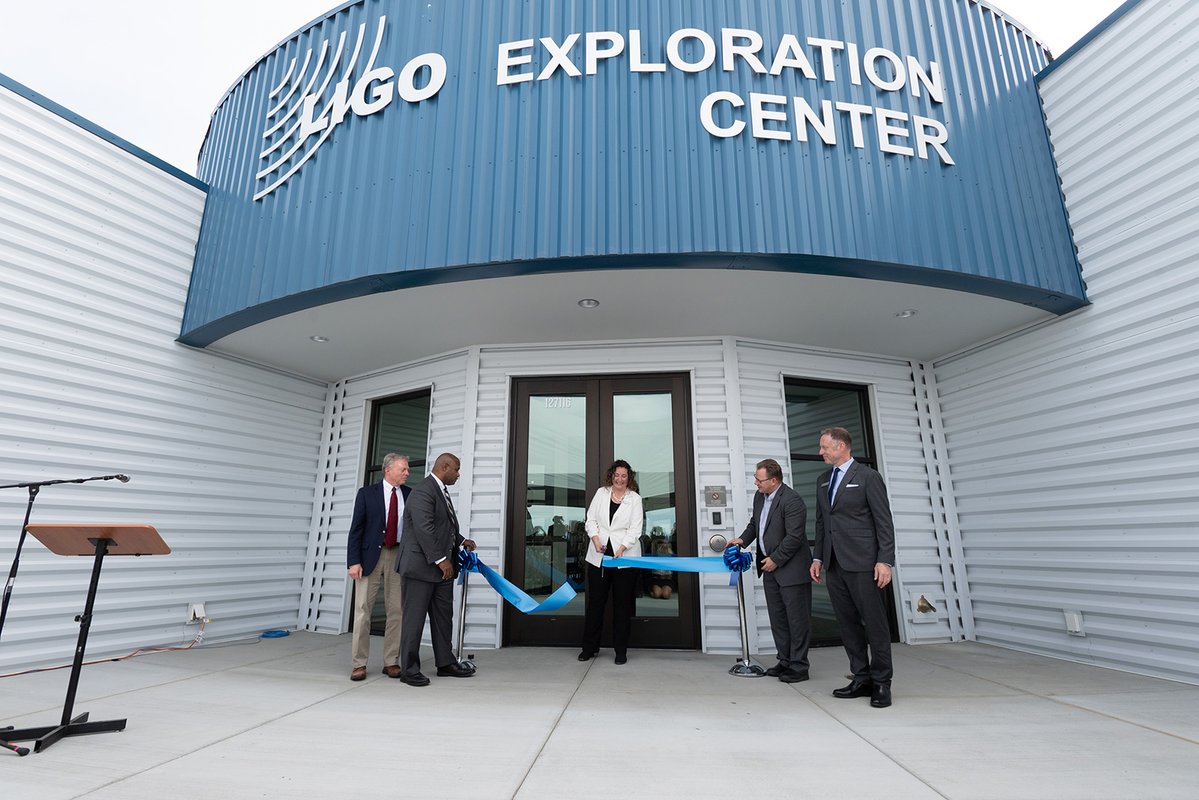 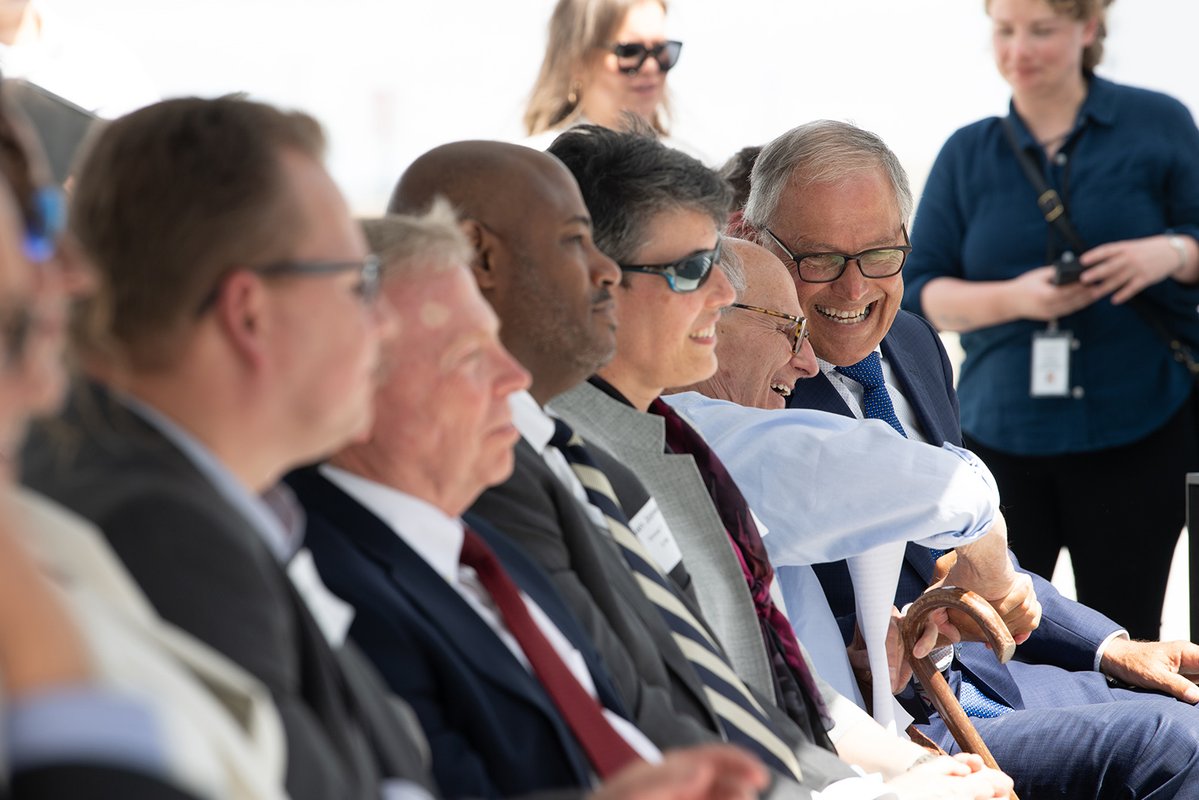 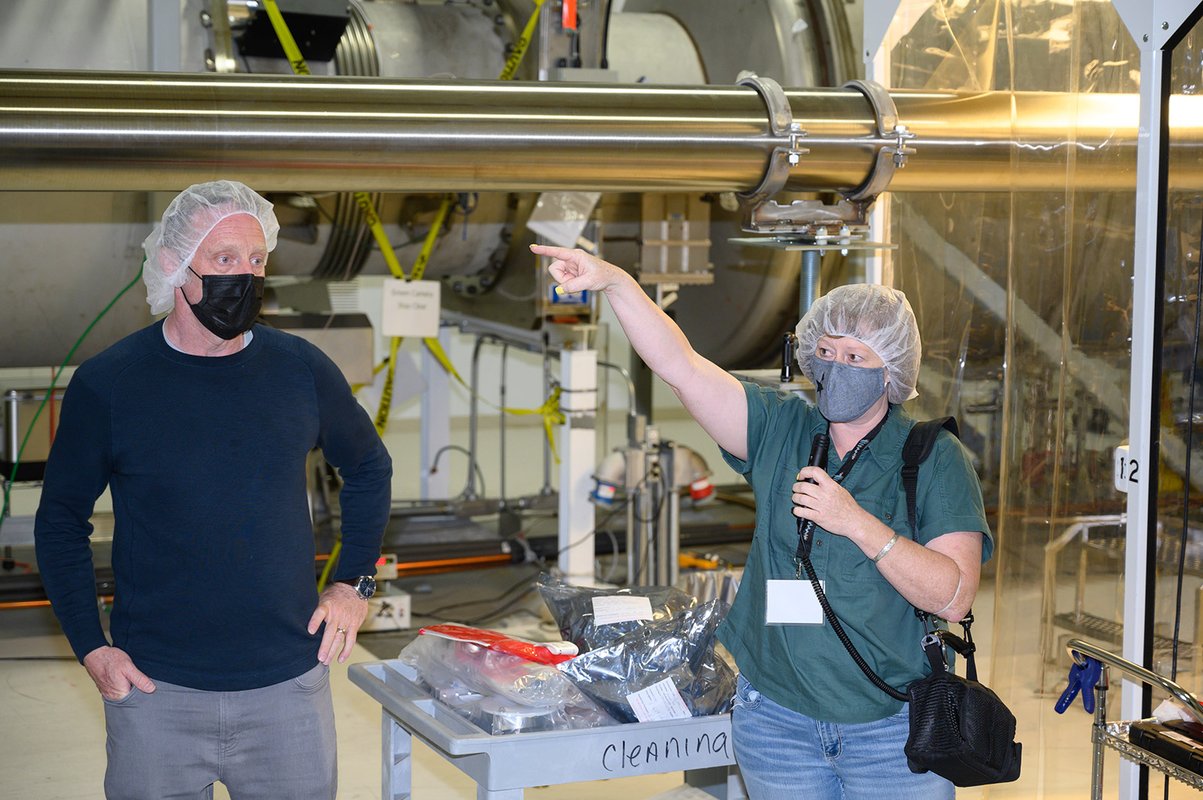 Mike Landry and Betsy Weaver of LIGO Hanford give visitors of a tour of the facility.
Credit: Joe Giaime/LIGO
Download Full Image 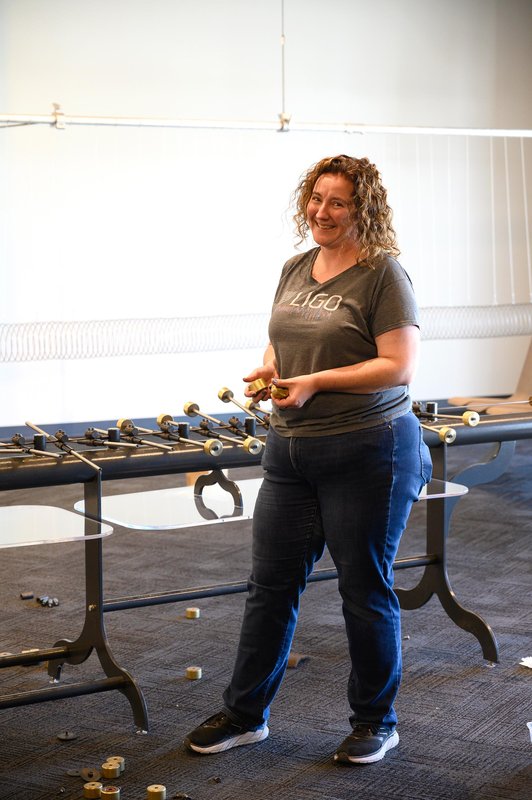 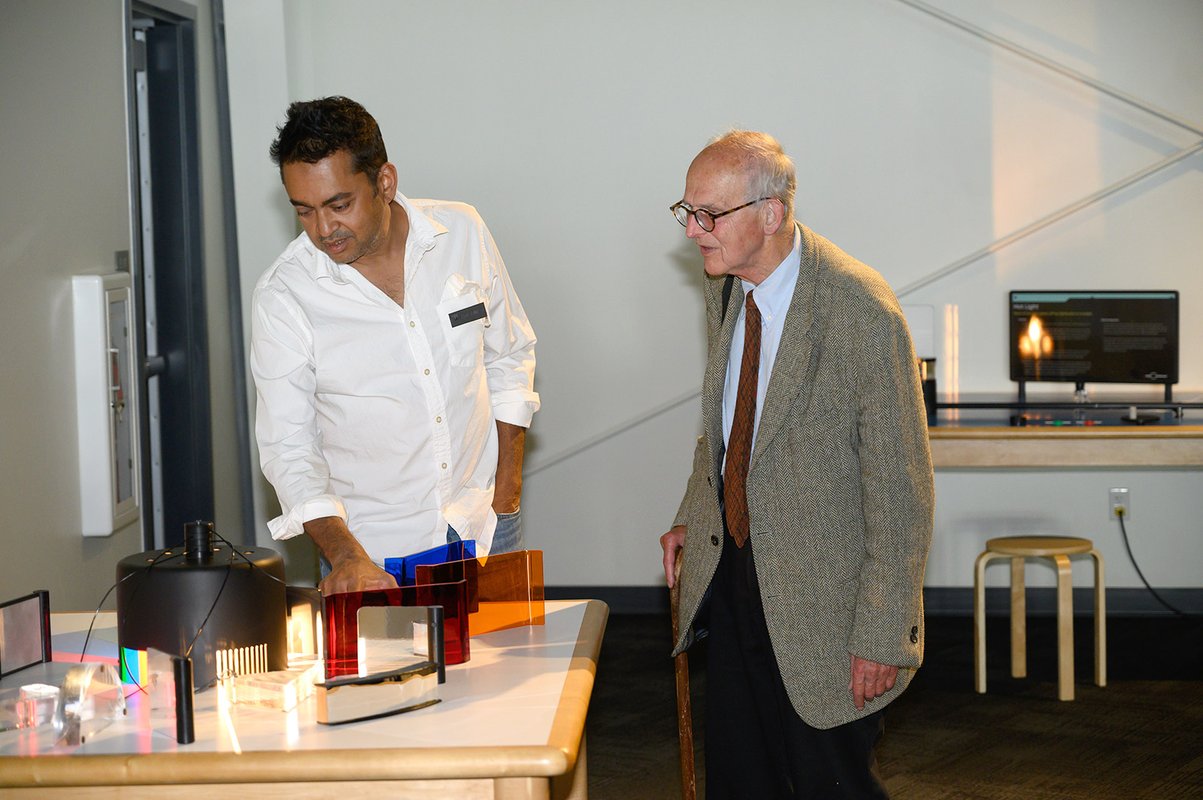 Rana Adhikari of Caltech and Rai Weiss of MIT discuss one of the new exhibits at the LIGO Exploration Center.
Credit: Joe Giaime/LIGO
Download Full Image