On June 7, at Caltech's Palomar Observatory in the forested mountain outside San Diego, members of the Pauma band of Indigenous peoples gathered to celebrate the naming of the first known asteroid to circle entirely within the orbit of Venus. The asteroid was originally discovered in 2020 by the Zwicky Transient Facility, or ZTF, which operates at the Palomar Observatory. Sometime after its discovery, the ZTF team decided to ask the Pauma band, whose ancestral lands include the mountainous region where the observatory is located, if they would like to bestow the new cosmic find with a name of their choosing.

Ultimately, the Indigenous group chose to name the asteroid 'Ayló'chaxnim, which means "Venus girl" in their native language of Luiseño.

The Palomar naming ceremony included blessings, traditional Pauma songs, and a reading of a poem titled Luiseño Songs of the Seasons, which describes how "it will soon be time for the acorns to fall from the trees" when "Venus is rising."

Jonas Zmuidzinas (BS '81), director of Caltech Optical Observatories and Caltech's Merle Kingsley Professor of Physics, addressed the Pauma band at the ceremony. "The systematic study of the night sky is actually a very ancient pursuit. It's easy to understand why—just look up on a dark, clear night, especially at a place like Palomar, and let the magnificent beauty of the night sky fill you with a sense of wonder and awe. Your ancestors, going back many thousands of years, were very skilled at studying the night sky, and used their knowledge to develop calendars, to mark the seasons, and to find their way on journeys," he said. "The ancestors of the Pauma band were in fact the first Palomar astronomers."

"An encounter with a planet probably flung the asteroid into Venus's orbit," explained Tom Prince, the Ira S. Bowen Professor of Physics, Emeritus, at Caltech and a co-investigator of ZTF, in a previous Caltech story about the finding.

If similar asteroids with orbits that fall entirely within the orbit of Venus are discovered in the future, they will belong to the 'Ayló'chaxnim family of asteroids (the official names of asteroid families derive from the name of the first object found in the class). 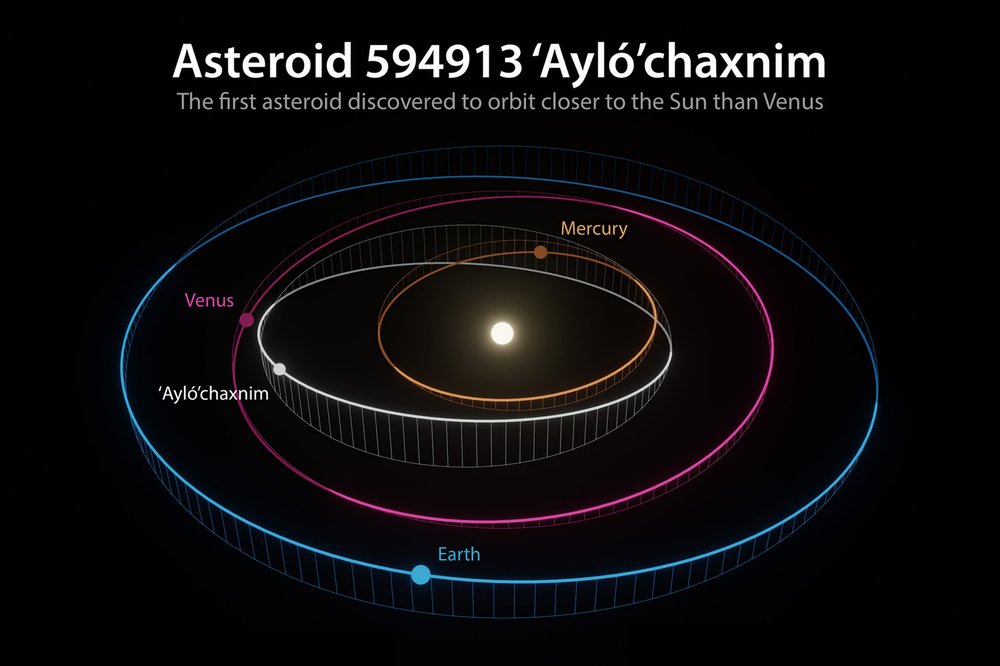 The orbits of Earth, Venus and Mercury, and 'Ayló'chaxnim. Light vertical lines illustrate the 3D orientation of each orbit relative to the main plane of the Solar System. The dots show the exact positions of planets at the time of discovery on January 4, 2020, when both 'Aylóchaxnim and Venus were in the evening sky over Palomar Mountain. (Caltech-IPAC/R. Hurt)
Image Lightbox 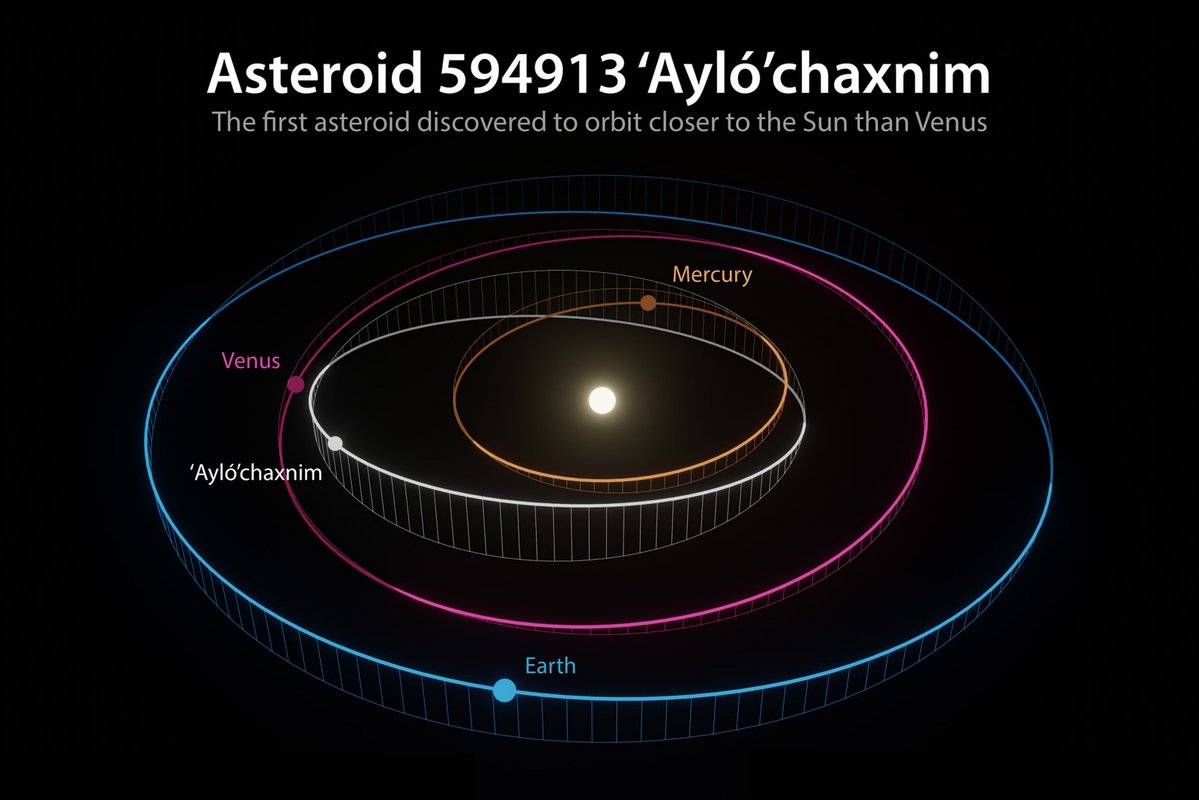 The orbits of Earth, Venus and Mercury, and 'Ayló'chaxnim. Light vertical lines illustrate the 3D orientation of each orbit relative to the main plane of the Solar System. The dots show the exact positions of planets at the time of discovery on January 4, 2020, when both 'Aylóchaxnim and Venus were in the evening sky over Palomar Mountain. (Caltech-IPAC/R. Hurt)
Download Full Image

George Helou, a ZTF co-investigator and the director of IPAC, an astronomy center at Caltech, says the ZTF team asked the Pauma band to name the asteroid as a "celebration of their language, history, and connection to the night sky."

Patti Dixon, a Pauma band member and a professor of American Indian Studies at Palomar College outside San Diego, says she and her fellow tribe members initially wanted to name the asteroid "Venus's daughter," but the word was too long in their native Luiseño language to be accepted by the International Astronomical Union (IAU), the official organization that assigns names to celestial bodies. Dixon said she thought the word "daughter" conveyed that the asteroid is a part of Venus, but in the end, they settled on "Venus girl," or 'Ayló'chaxnim.

The asteroid naming and related activities will inspire Pauma children to learn more about science, says Jessica Petri, director of the Pauma band education center. "This event will expose children to the awesome observatory in their backyard," she says.

The Pauma band, known formally as the Pauma Band of Mission, or Luiseño, Indians, is one of six tribes of native people in the San Diego area that belong to the Luiseño Indian tribe. The ancestral lands of the Luiseño peoples include Palomar Mountain, where Palomar Observatory is based.

"Some of the best-tasting acorns, the black oak acorns, can only be found at the top of the mountain," explains Dixon. "As part of our traditions, we take our burlap sacks to the mountain, gather the acorns, haul and dry them, crush and leech them, and ultimately make a Jell-O-like meal called wíiwish."

"Hunting and gathering are part of our traditions," she says, "The movement of the stars and Venus are also parts of our traditions. Science can affirm the traditional truths but also show that science will not harm the truths."

This is not the first time asteroids discovered at Palomar have been named in the Luiseño language. In 2009, Jean Mueller, a retired telescope operator who worked at Palomar for more than 30 years, worked with the Pauma band to name three asteroids she discovered (Mueller also discovered 11 additional asteroids, 107 supernovae, and 15 comets during her time at Palomar). The three asteroids, named after Luiseño gods, are: Tukmit (Father Sky), Tomaiyowit (Earth Mother), and Kwiila (Black Oak).

ZTF is funded by the National Science Foundation and an international collaboration of partners. Additional support comes from Caltech and the Heising-Simons Foundation. ZTF data are processed and archived by IPAC. NASA supports ZTF's search for near-Earth objects through the Near-Earth Object Observations Program. 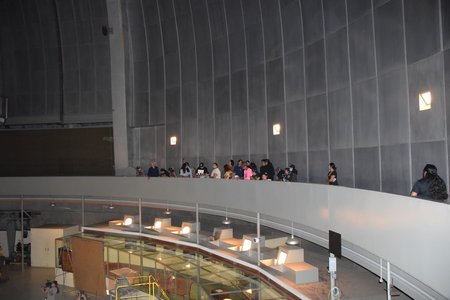 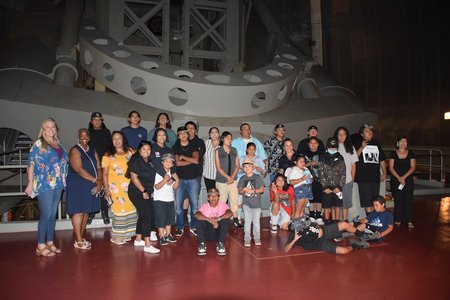 Members of the Pauma band pose inside the dome of the 200-inch Hale Telescope. Credit: Palomar Observatory/Caltech 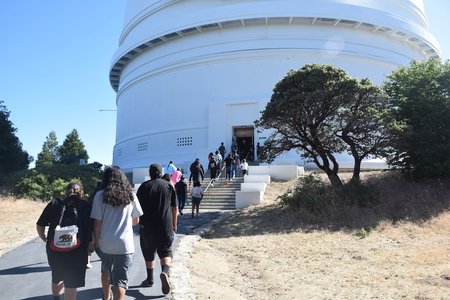 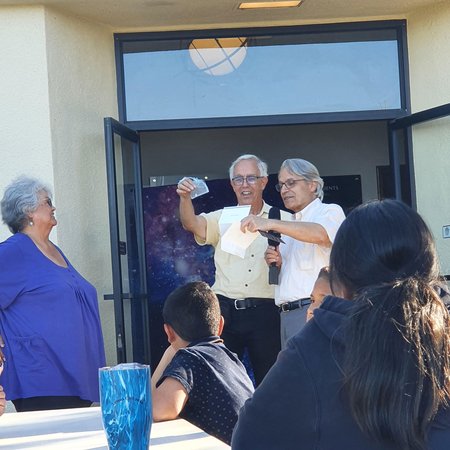 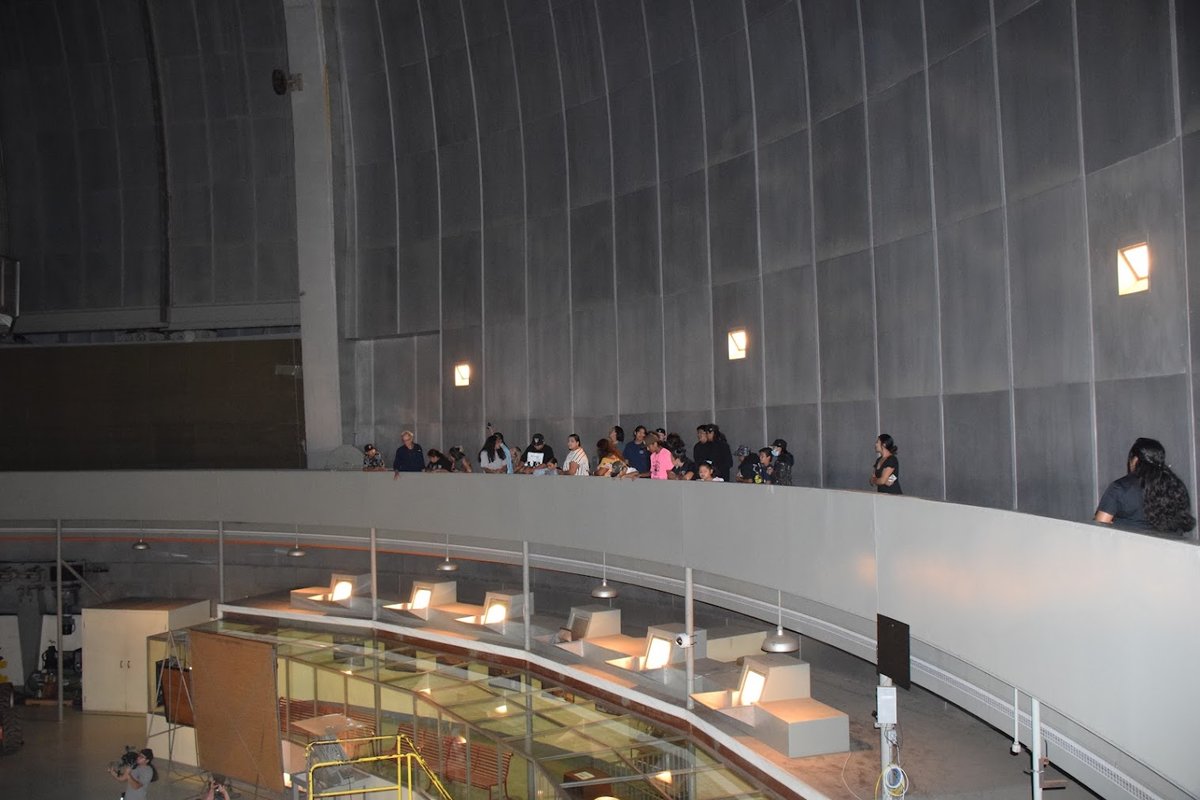 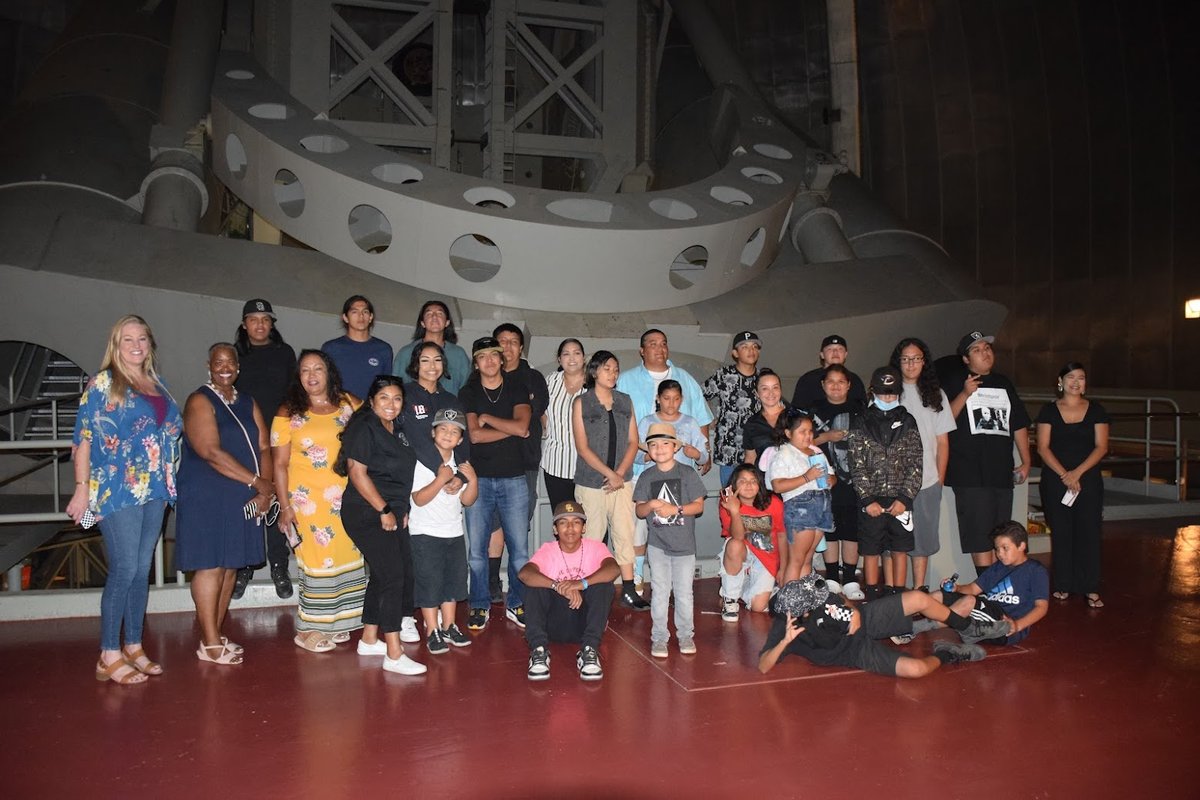 Members of the Pauma band pose inside the dome of the 200-inch Hale Telescope.
Credit: Palomar Observatory/Caltech
Download Full Image 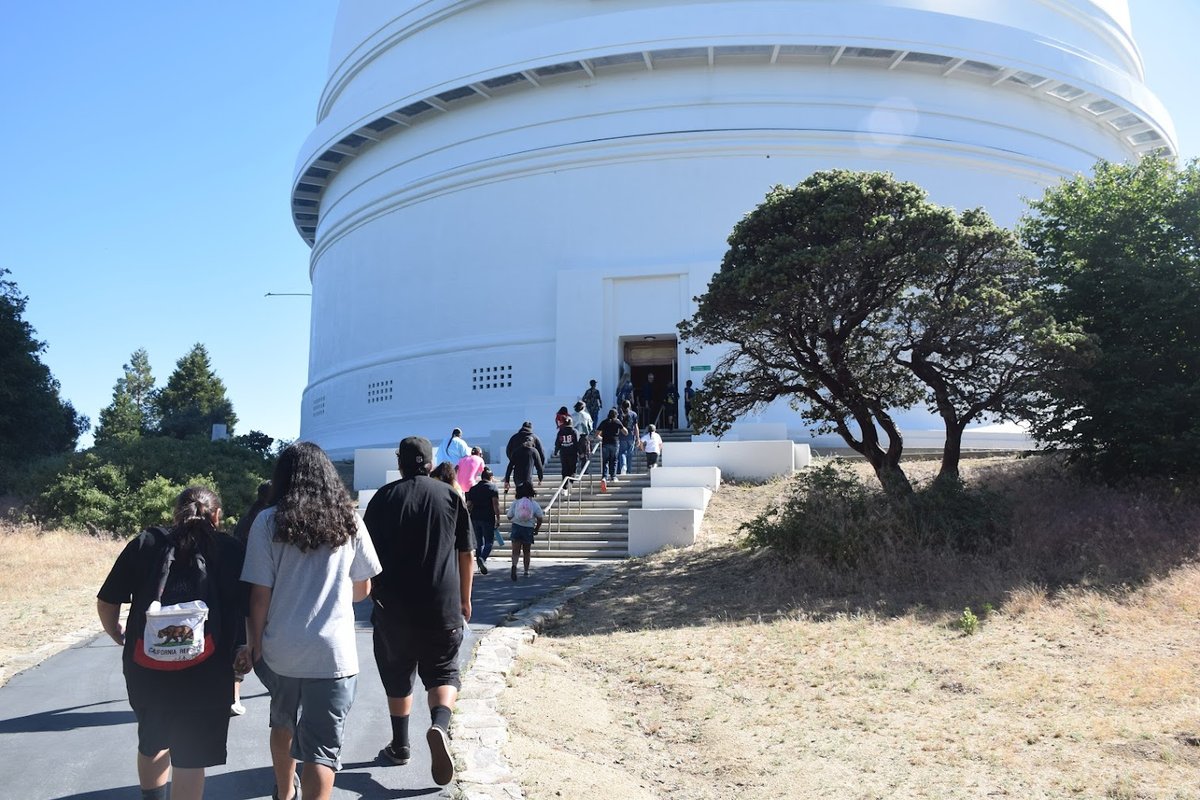 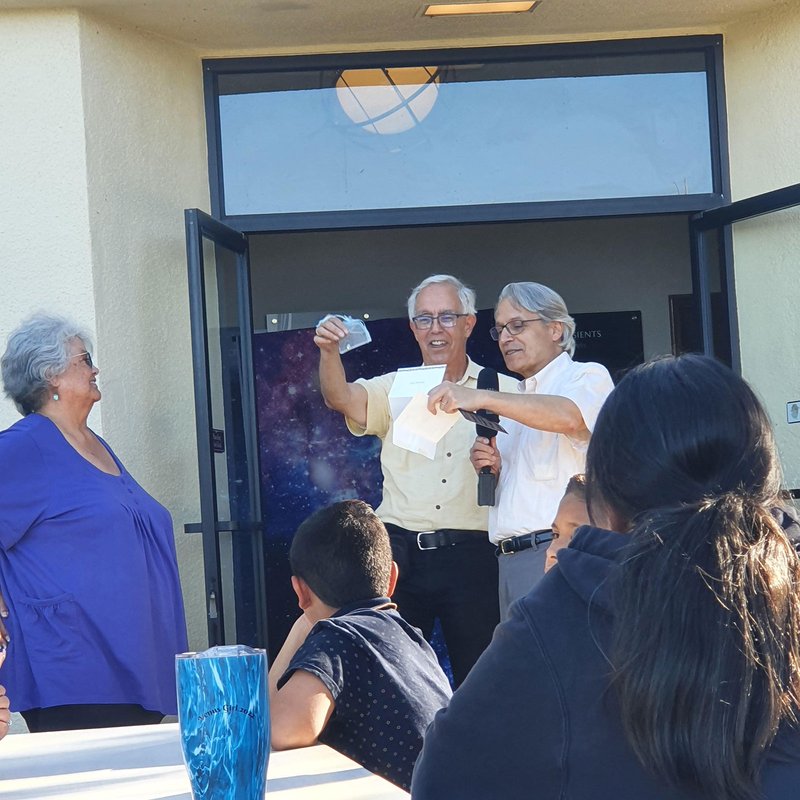